First, let us get this out of the way: I do not consider these plants as bulbophyllums (bulbophyllines, yes), so I am going to refer to these plants all throughout this article as 'cirrhopetalums'. The genus Bulbophyllum has become an unwieldy repository of plants with very diverging features that I dare anyone who disagrees to define Bulbophyllum- in just one sentence. However, I have nothing against people who do. There are far better things to talk about. Such as teaching you how to distinguish these two species apart.

Cirrhopetalum brevibrachiatum and C. makoyanum are two frequently confused species particularly in the Philippines where their ranges overlap. Both have slender flowers in yellow (most of the time though not all the time, for C. brevibrachiatum) minutely spotted with red, and there are no distinguishable means to tell them apart by just looking at the vegetative growths. However, seeing the differences is easy. But you are going to need a magnifying glass. And a good nose. And razor-sharp judgment.

For these two species, you only have to pay attention to two organs: the column wings and the labellum.

The column wings of C. brevibrachiatum are broadly rounded below and are terminated by a minute apiculate, antrorse (forward-facing) tip called a 'stelidia', hence, the species name 'brevibrachiatum' which translates to 'short arms' (in red). Geez, I love descriptive names. The labellum is curved at a sharp angle that is made eminent by a pair of broadly triangular prominences, in blue. However, some specimens I have seen throughout the years have those prominences very vaguely expressed to none at all. The column wings and stelidia appear to be reliable, diagnostic features. 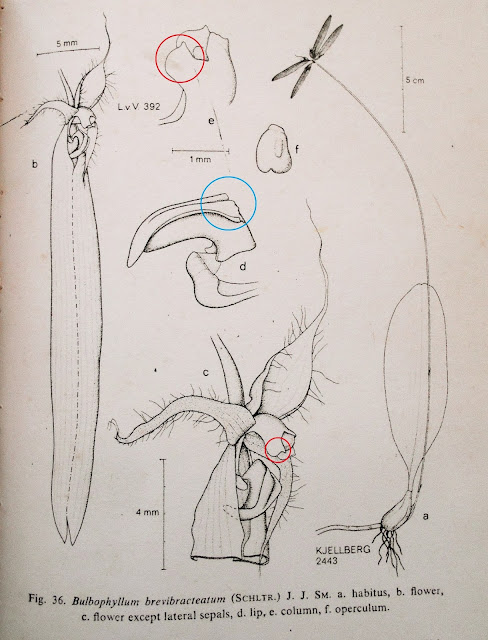 Cirrhopetalum makoyanum also has its column wings broadly rounded below but the tips are upwardly curved, rather like a sickle. There is none of that forward-pointing appendage seen on the previous species, though people with poor eyesight or weak perceptions may mistake the tips for stelidia. In addition, the labellum has a pair of pointed calli situated at the hypochile (the base of the labellum), but you are going to need a magnifying glass to properly observe that. But really, it's that simple. I mentioned above that you are going to need a good nose for these two: while the flowers of C. makoyanum are odorless, those of C. brevibrachiatum typically have a weak, fetid odor. Despair not if you can detect nothing, as most people can't, anyway. 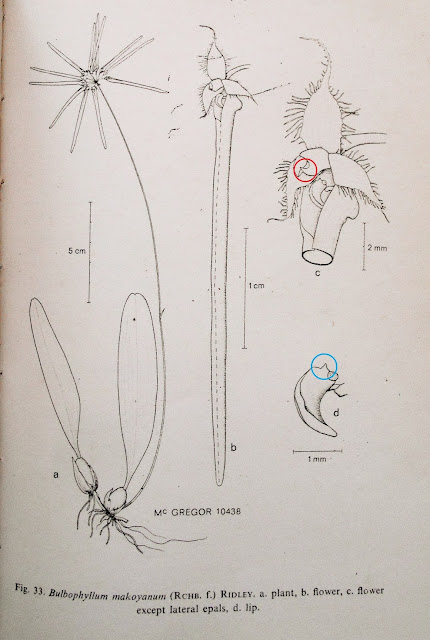 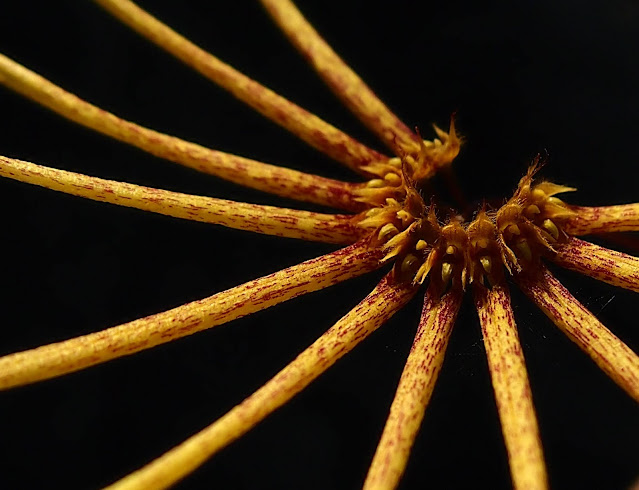 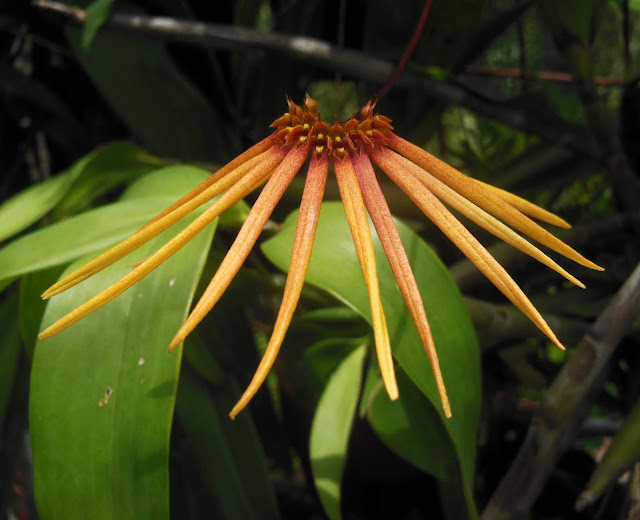 At this juncture, I should also add that whereas there is overlap in floral coloration, some plants of C. brevibrachiatum can have flowers other than yellow. See these three examples below: 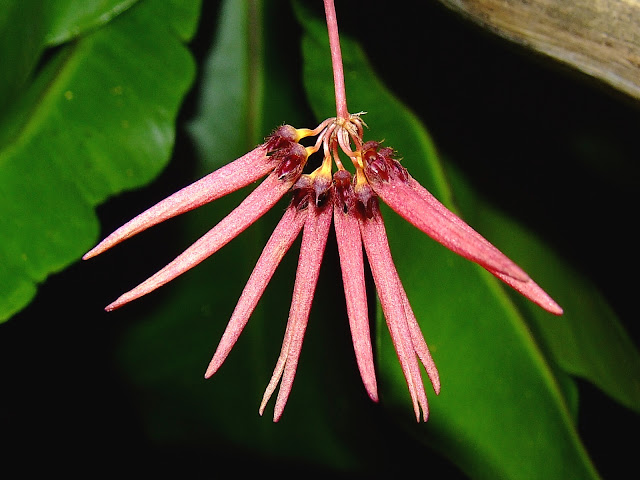 The flowers of C. makoyanum are more slender and longer than C. brevibrachiatum's, However, this feature is scarcely feasible when determining a plant's identity as there are also C. brevibrachiatum with lateral sepals of comparable appearance. For certainty, always refer to the column wing shapes and the labellum callus to properly identify your cirrhopetalums of any species.

You may come across references to C. brevibrachiatum illustrating just one inflorescence, with yellow flowers with broad sepals. But without photos of the column and the labellum as seen from the side, it would always be best to be skeptical. There was a report of this species' occurrence on Sabah in Borneo but the "solely photographic" proof "based on extralimital material" shows one such specimen. Unfortunately, Kew has since followed this authority and currently lists this species as also occurring on Borneo, leading to other possible misidentifications.

The photos of the line drawings I supplied above were taken from Gunnar Seidenfaden's 'Notes on Cirrhopetalum' (1973), and the line drawings were referenced by him from L. v. V. 392 which have duplicates in Kew (K) and the Nationaal Herbarium Nederland in Leiden (L), as well as 'Kjellberg 2443' which is deposited at the Swedish Museum of Natural History in Stockholm (S). The exclamation marks you see there (!) means that the author, Mr. Seidenfaden, had personally seen these specimens. The holotype (Schlechter 20702) appears non-extant; Friedrich Rudolf Schlechter deposited his specimens at the Berlin Botanical Museum, which was destroyed in 1943 during the Second World War. But what I am trying to say here is this: given a choice between a 'brevibrachiatum' featured in a book and ones that were drawn from the type materials then I certainly and unblinkingly would rest my faith on the latter. And in case you did not notice it, both the L. v. V. and the Kjellberg specimens have narrow and slender lateral sepals. 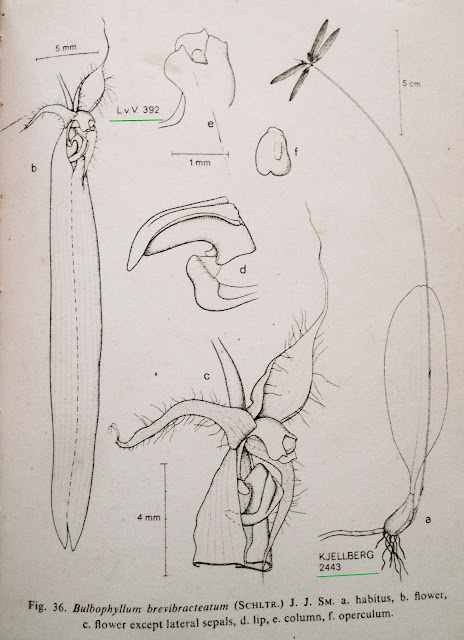 At this point, I am trying to teach you something that is practically impossible to impart to would-be orchidologists but will try anyway: good judgment. For such judgment to be made, one must be able to gather his references from reputable sources, then weigh these against one another. Merely Googling for photos taken from dubious sites (those that were manned by non-researchers) will get you nowhere. True, original descriptions should not be construed as final, as type specimens are often NOT representative of a species. Think about it: out of a population of hundreds, if not thousands of plants with a range of variations, a botanical collector would collect whatever is nearest to him, or whatever was available at that point in time, or whatever to his eyes was the most splendid example of this hitherto new species. Human biases come into play, and in many cases influence our concept of what a particular species should look like. However, if one feels like resorting to the go-to alibi of "this is only a variation of this and that" when confronted by a very different plant, then that person should be able to generate a battery of proofs that would buttress his claim, proofs that- whether he likes it or not- should still be grounded on the type specimen and/or the original description because no matter how imperfect those might be, there is no other acceptable point of reference. Merely citing a reference with zero proofs such as illustrations or close-up photos of the relevant floral parts- even if it was authored by a universally regarded 'authority'- does not constitute a 'proof'. Do not believe everything that is said to you, even those that are coming from me. Instead, use your eyes and a hefty serving of good judgment.

Popular posts from this blog

Distinguishing Alocasia boyceana, A. heterophylla, and A. ramosii, and some words about asking for plant identification 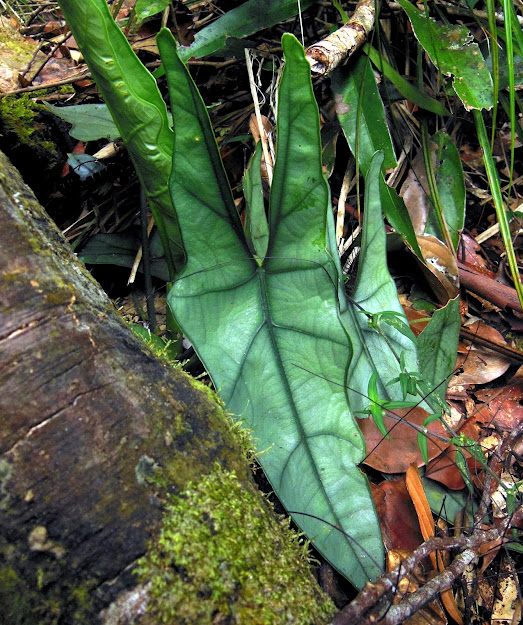 In the Philippines, three commonly encountered Alocasia species are frequently mixed with one another that identification of plants posted in social media has resulted in a muddied concept of what constitutes what, with most plants getting labeled as ' Alocasia heterophylla ' even though practically no one can elucidate why he thinks it is that species. More on that later. Still, admit I should that I, too, was confused not too long ago until I got fed up with my own ignorance and decided to undo it once and for all. I now show thee the path to thy enlightenment. The main aim of this article is to allow you to reliably identify which is which. I am going to keep this ultra-simplified, so I am not going to talk about floral morphologies. People usually don't catch them in flower anyway and very few have the inclination to save dissected inflorescence samples in an alcohol solution for later reference. The other aim, well, we'll get to that later. Alocasia heterophylla
Read more

Alocasia sinuata in the wild 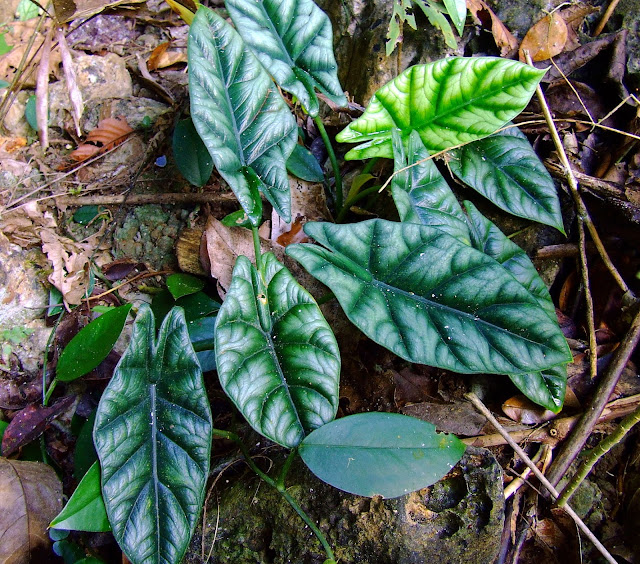 A popular subject in horticulture, Alocasia sinuata is a small-growing Philippine endemic with bullate, thickly coriaceous, shiny leaves. The plants start out green then mature into a deeper green with almost metallic gray patina and with dark green sunken veins, resulting in a memorable foliage display of pure bliss. The species was described by Nicholas Edward Brown in 1885 from a cultivated specimen from Kew which was given by William Bull. The original collector of this plant is unknown. In the type sheet, Brown noted that it was collected in the 'Malay Archipelago' which Brown himself corrected to 'Philippines'. A photo of the holotype can be viewed here: http://apps.kew.org/herbcat/getImage.do?imageBarcode=K000291398 What is notable in the type specimen is the very deep sinus with rather distant posterior lobes. However, as noted by George Yao, an ardent student of Araceae in the Philippines, posterior lobing and sinus depth is variable in Alocasia anyway.
Read more

The unusual and majestic Rhaphidophora monticola 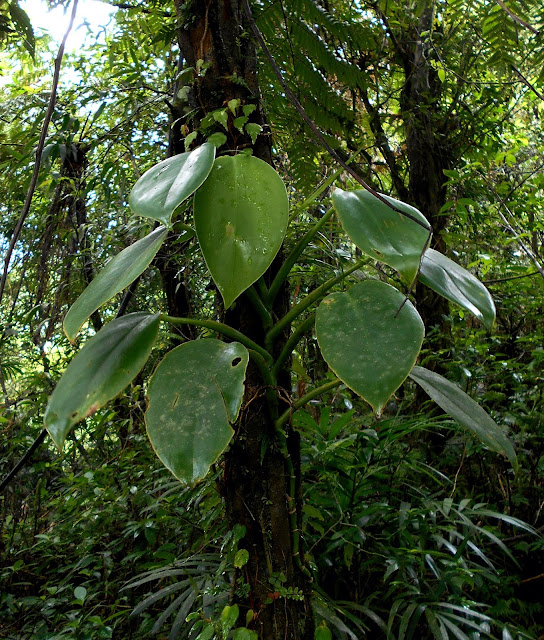 The current popularity of aroids around the world has brought into spotlight several previously obscure species of the species-rich Anthurium as well as Philodendron and Monstera. This triumvirate of Neotropical aroids form the bulk of Araceae found in very many private collections worldwide, but monsteroid genera from Asia, particularly Rhaphidophora , are increasingly being regarded as worthwhile subjects too, especially the widespread and very variable R. korthalsii . In the Philippines, one species stands out among all the other known species to date, but is virtually unknown in horticultural circles- R. monticola . Rhapidophora monticola was described (as ' Rapidophora monticola ') in 1910 by Kurt Krause in Botanische Jahrbucher fur Systematik, Pflanzengeschichte und Pflanzengeographie (Botanical Yearbook for Systematics, Plant History and Plant Geography) based from specimens collected by A.D.E. Elmer in Cuernos Mountains in Dumaguete, Negros Oriental in June, 19
Read more